Moments after hitting the year’s most breathtaking basketball shot Friday night, Evanston freshman Blake Peters found himself at the bottom of a pile of pandemonium literally gasping for air.

“I couldn’t breathe,’’ Peters said Sunday in his living room.

Everyone who witnessed Peters’ 80-foot heave at the buzzer to beat Maine South 45-44 struggled similarly, for different reasons. The improbable shot turned Peters into a national Internet sensation by the time he awoke Saturday from a restless night, the viral video viewed more than 2 million times after ESPN’s “SportsCenter” dubbed it the No. 1 play of the day. Call it “The Peters Prayer.”

“That was one of the best moments of my life,’’ said Peters, 15. “I thought it might go in, but when it actually did, it was pretty cool. I remember blinking, I was on such an emotional high. I started running and all my teammates tackled me.’’

Somewhere in the mound of human joy, the kid who played Superman for a night lost his Clark Kent-style glasses. Peters found the black horn-rimmed goggles he wears for games later in the locker room resting on the nose of team comedian Jalen Christian, who wore them during the celebration. When the whole Wildkit and caboodle finally calmed down, Evanston coach Mike Ellis congratulated Peters, who joined the program last summer after moving from Highland Park.

“Well,’’ Ellis said to Peters, “it only took five months for you to become a legend.’’

This tale will be told long after Peters leaves to save college basketball games. 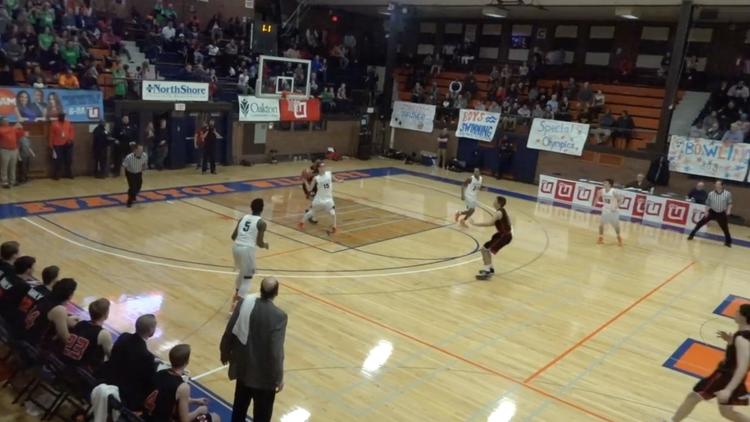 Evanston's Blake Peters hits a shot from nearly the full length of the court to give his Wildkits a miraculous 45-44 win over Maine South. (Mike Ellis)

Evanston's Blake Peters hits a shot from nearly the full length of the court to give his Wildkits a miraculous 45-44 win over Maine South. (Mike Ellis)

If possible, the buzzer-beater meant even more to Peters because he turned the ball over with Evanston down 43-42 with eight seconds left. Ellis tried signaling time out when two Maine South defenders trapped Peters, but the official never saw him. In the stands, Ashley Peters, Blake’s dad, sent a text to his wife, Shana, who missed the game visiting her father in Florida.

“I just texted, ‘Turnover,’ and in my mind I’m thinking this game is over,’’ Ashley said.

That’s what everyone thought when Maine South’s Michael George went to the line with 2.6 seconds left after getting fouled. During a timeout before the free throws, Ellis drew up a play if George hit both shots. He offered prescient advice if George missed the second one.

Just before the free throws, Peters switched sides of the lane with Harry Porter so they would be in the right spots for Ellis’ designed play. When the 6-foot guard wrestled the rebound away from the only Maine South player positioned in the lane, he took one dribble and let it fly. The last second ticked off the clock as The Peters Prayer sailed over half-court.

“It was a three-quarter, sidearm shot and I saw the angle from the bench and thought, ‘No way that’s going in,’ ’’ Ellis said.

It went in, and in the stands Ashley and his 11-year-old son, Ian, jumped for joy with most everyone else inside Beardsley Gymnasium.

Ashley scrambled for his phone to text his wife and mother: “Blake just hit a full-court shot to win it! Amazing. The place is crazy.”

As bedlam ensued and teammates buried Peters, a stunned Ellis stood on the sideline full of mixed feelings. Friday marked the first game for Maine South since Thomas Gardiner, the father of Hawks senior forward Tommy, died in a single-car accident Jan. 15 on his way to watch his son play in Galesburg. For warmups, both teams wore black T-shirts with white letters on the front that read: “Bigger Than Basketball.’’ Ellis bought 20 of those shirts that sold for $10 apiece to raise money for the grieving family, which the Evanston coach thought of immediately after Peters’ shot went through the net and the ball bounced closest to Tommy Gardiner.

“Honestly, when it went through, 50 percent of my feelings were joy and 50 percent were feeling for the Gardiner family,’’ Ellis said. “I have so much respect for Maine South and (coach) Tony Lavorato. After enduring all that, they waited for our guys to shake hands.’’

Postgame remains a bit of a blur of emotions for Peters, who remembered feeling redemption for his late turnover and crediting the new Drake song, “God’s Plan,’’ he listened to pregame. He also recalled wanting to text his mom, except a steady stream of social-media well-wishes into the hundreds kept interrupting him.

“I’ve never had that many alerts ever,’’ Peters said.

By the time Peters and some friends from Highland Park gathered at his house, the shy freshman who knew 10 people on his first day of school last fall had become the most popular guy in town. Within an hour of the shot, Peters gained more than 1,000 Instagram followers after he changed his privacy settings. ESPN anchor Scott Van Pelt tweeted, “Hooray for sports’’ — Peters’ favorite response. Sports Illustrated’s Twitter account posted a video of the shot under the caption: “Blake Peters is going to remember this shot for the rest of his life.’’

“That’s when I thought this might really be big,’’ Peters said. 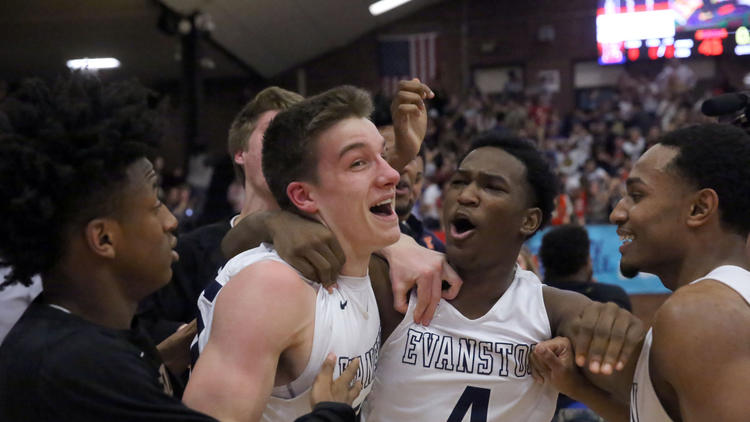 Evanston defeated Maine South 45-44 on Friday night after freshman Blake Peters made an 80-foot shot at the buzzer. It was the first game for Maine South since the death of Thomas Gardiner, the father of forward Tommy Gardiner.

More confirmation came Saturday night when Peters walked into the Robert Crown Center for an Evanston-Lake Forest hockey game. His given first name, Russell, quickly has become a household name.

A crew from WCIU-26 is expected to greet Peters at school Monday morning. A newfound celebrity awaits Peters, a grounded young man who seems 15 going on 35.

“There would be a lot of high school players who would walk through the hallways Monday like he was elected mayor of Evanston,’’ Ellis said. “Blake will walk in like nothing happened. He’s mature enough to handle this.’’

To keep Peters humble amid the hoopla, Ellis had fun challenging his frosh phenom at Saturday’s shootaround.

That’s why they call it a once-in-a-lifetime shot.